UN calls for education in conflict, condemns attacks – The Journal

UN Security Council strongly condemned attacks on schools, teachers and children and called on all parties to promote the right to education in conflict

UNITED NATIONS (PA) – The UN Security Council has strongly condemned attacks on schools, teachers and children and called on all parties to promote the right to education in conflict.

A resolution passed by the council on Friday by 15 votes to 0 underscored the “invaluable role” that education plays in providing “living spaces” and its contribution to achieving peace and security.

“For the first time, the Security Council adopted a resolution solely dedicated to the protection of education,” Norwegian Ambassador to the UN Mona Juul, who sponsored the resolution with Niger, told the Council after the vote.

She told the council: “Education is under attack around the world.

The resolution urges the 193 UN member countries “to develop effective measures to prevent and counter attacks and threats of attacks on schools and educational institutions.”

It condemns the military use of schools, which violates international law and can make buildings “legitimate targets of attack, thus endangering the safety of children and teachers as well as their education”.

The resolution urges all parties to armed conflict to respect the fact that schools are civilian facilities under international humanitarian law. And he calls on all countries “to take concrete measures to mitigate and avoid the use of schools by the armed forces”.

The council expressed “deep concern that girls and women may be targeted victims of attacks on their access to education and their pursuit of education,” saying these attacks may include rape, sexual violence. and sexual slavery.

Council members urged UN members “to take action to ensure that girls enjoy their right to education on an equal basis.”

Juul said the 99 countries that co-sponsored the resolution are “an expression of a truly global commitment to this important cause.”

The Norwegian Ambassador stressed that the adoption of the resolution must be followed by its full implementation.

“We must do more to protect educational institutions from military use and attack,” Juul said, “and ensure the continuation of education during conflict, including investing in education in situations of crisis and conflict “.

FILE – Norwegian Ambassador Mona Juul speaks at the Security Council at United Nations Headquarters on Monday, April 29, 2019. The UN Security Council on Friday, October 29, 2021 strongly condemned the attacks on schools, teachers and children and called on all parties to promote the right to education in conflict. “For the first time, the Security Council has passed a resolution solely dedicated to protecting education,” Juul, who sponsored the resolution with Niger, told the council after the vote. (AP Photo / Richard Drew, file) 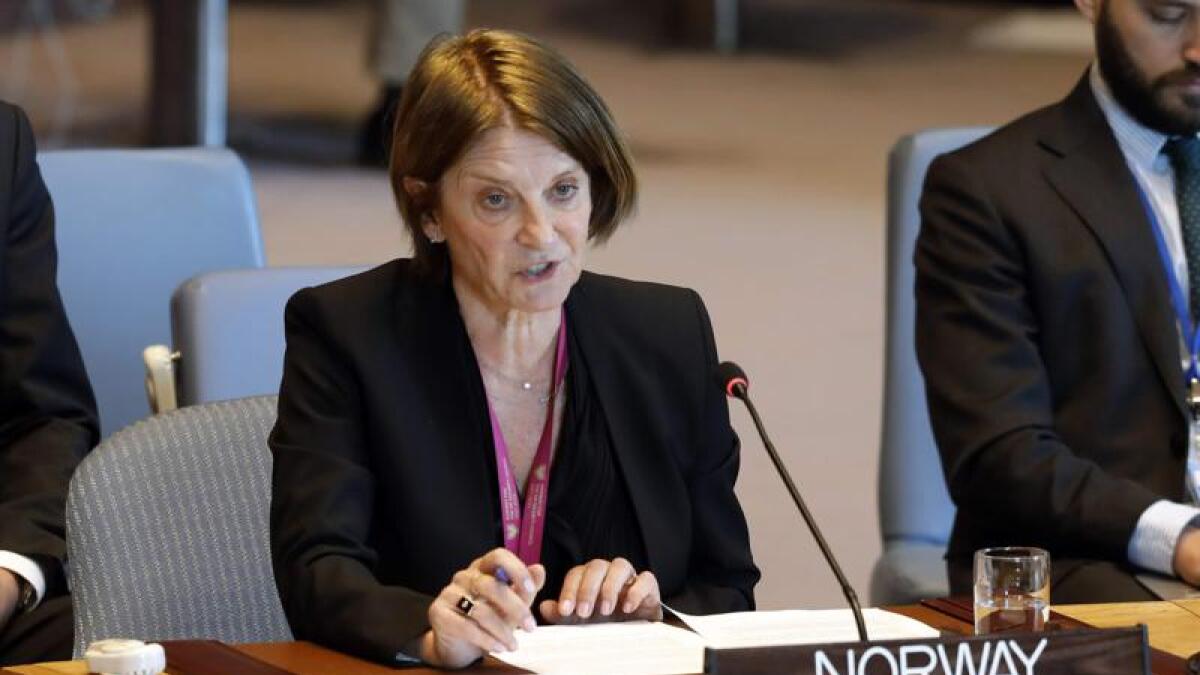